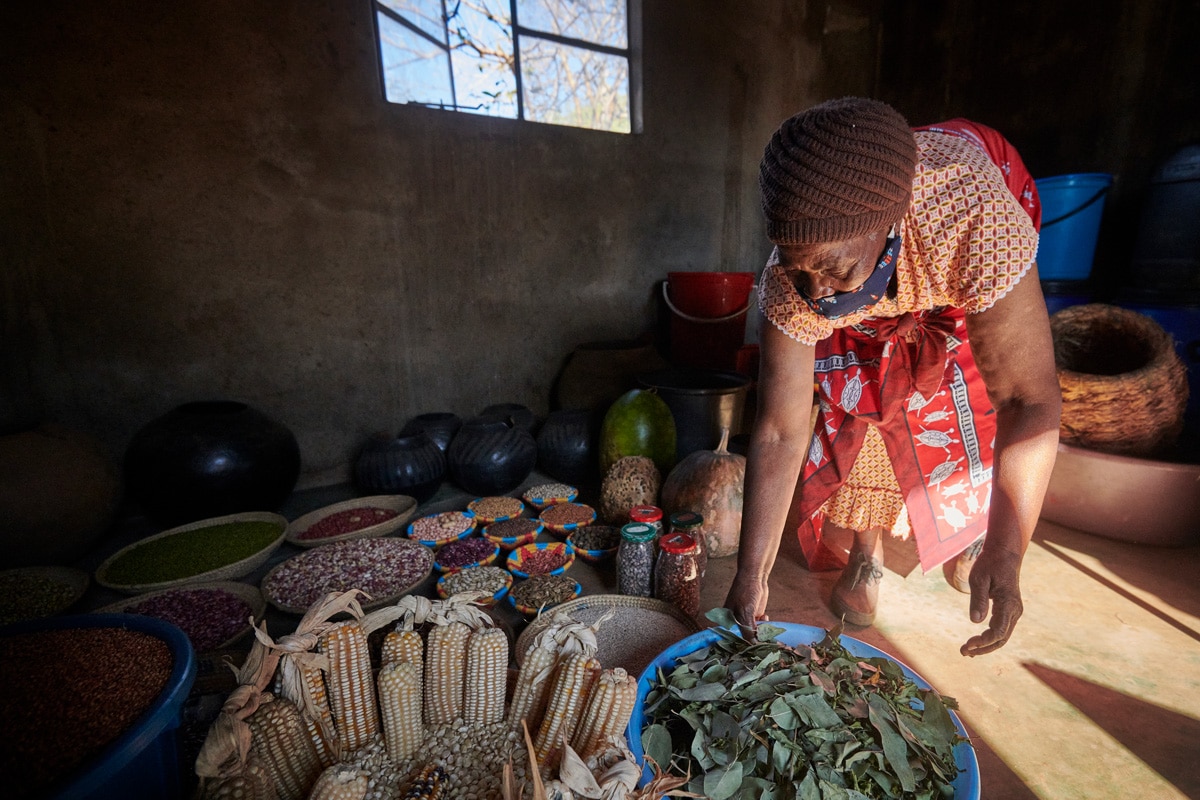 Corinne Mngomezulu, a Biowatch seed custodian and agroecology farmer, with her seed bank in Ingwavuma, a rural area nestled deep in the Umkhanyakude District of KwaZulu-Natal, near the South African border with eSwatini.

The global industrialised food system has failed. According to the 2021 UN Report on the State of Food Security and Nutrition, up to 161 million more people around the world were facing hunger in 2020 than in 2019, partly due to the COVID-19 pandemic. Globally, nearly 1-in-3 people did not have access to adequate food.

“When people see these staggering statistics, the assumption is that there is not enough food being produced around the world. The ‘solution’ seems obvious – produce more food. However, this is not so. It’s a falsehood that is skilfully perpetuated by big business and corporate interests to hoodwink us into subjugation to an industrialised food system and its poisons – chemicals, pesticides, malnutrition, hunger, biodiversity destruction, air and water pollution, the climate crisis … the list goes on,” said Rose Williams, Biowatch Director.

The UN Food Systems Summit on 23 September should have been a key space to deal with this crisis. “It wasn’t,” said Vanessa Black, Biowatch’s Advocacy, Policy and Research Co-ordinator. “Instead, the Summit drew wide and active international criticism and condemnation for seeking to further reinforce the gross power imbalances that corporations hold over our food systems. This merely reinforces the crisis.”

Mvuselelo Ngcoya agrees. In this week’s episode of Good Food Conversations with Biowatch, the agroecology farmer, Associate Professor at the UKZN School of Built Environment and Development Studies, and Biowatch Trustee, said that the crisis lies in the industrialised food system which is harmful, inadequate and precarious. “Most of our food (in South Africa), it is claimed, is produced by some 40 thousand commercial farmers. That’s not food sovereignty; you are not a food sovereign nation when your food is dependent on the wills and the whims of such a small number of people,” he said. Click here to listen to the podcast.

Also this week, Biowatch launches the latest in a series of publications, a Biowatch Briefing on Farmer-led Seed Systems. “How can we secure food sovereignty in the face of looming ecological and social crises?” asks Lawrence Mkhaliphi, Biowatch’s Agroecology Manager. “Farmer-led Seed Systems can and do make a critical contribution in responding to current global ecological and social threats through adaptation to climate change, enhancing agricultural biodiversity, strengthening food security and sovereignty, increasing dietary diversity, and recognising and honouring indigenous knowledge and the key roles of women,” he says. Click here to read or download the briefing.

In the build-up to World Food Day on 16 October, agroecology farmers working with Biowatch will be celebrating in KwaHhohho, northern KwaZulu-Natal, with drama, music and a seed exhibition. “The celebration will be preceded by an annual farmer reflection and planning day, which will be a great space for farmers to plan together and to strengthen communication,” says Mpho Ncube, Biowatch’s Farmer Support Liaison